New Year At The Club

Owing to the closure of the British Legion in St Boswells, the club has taken the decision to open at various times over the Christmas and New Year period. On Saturday 27th December (time TBC) there will be a Bar Games Evening and general drinks session(!) for members and their guests hosted by Mucky.

We are also open for Hogmanay (New Year’s Eve) to cater for people who would like to drink and have a bit of fun in a relaxed, informal environment. The bar will be open on Wednesday 31st January from 7pm and we will make sure it is well stocked with the cheapest drinks in the village, plus music and any other entertainment we can think of! Come along and join us – we have a license until 1am. 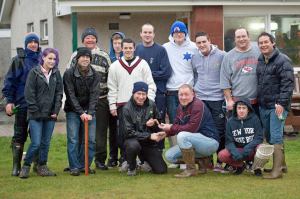 On New Year’s Day, from 12 noon, we will be opening up for our annual New Year’s Day Cricket Match. Played for the ceremonial quaich, everyone who wants a game gets into two teams and plays for as many overs as there are bowlers – that’s everyone in each team – trying to score as many runs in the least amount of time. Whatever the weather, THE GAME WILL BE PLAYED. We’ll try and start as close to 1pm as we can

Of course, the bar will be open serving great value drinks and welcoming everyone whether they play cricket or not. See you there.

This entry was posted in Club News. Bookmark the permalink.